Bitcoin uses cryptography to create a key pair that controls access to bitcoin on the blockchain. Each bitcoin key pair consists of a public and private key.

What is a Bitcoin private key?

A bitcoin private key is simply a large (256 bits) secret number that allows bitcoin to be unlocked and sent. Each private key creates a unique signature that authorizes the transaction of bitcoin for the owner. It’s called a private key because it is meant to be kept private and not shown to other people.

What is a Bitcoin public key?

A bitcoin public key is another large number but allows bitcoin to be locked and received. It’s called a public key because it is meant to be shared publicly and enables you to receive funds.

What is a Bitcoin address?

A bitcoin address is a hashed smaller version of the private key.

What is the difference between private and public keys?

People can over-complicate explanations by trying to explain digital signatures, signing transactions, and wallet import formats. But the truth is most users don’t need any of this detail to understand the basics of how keys work in Bitcoin.

You can think of public-key cryptography as a lock, but with two keys instead of one:

Although you don’t need to understand cryptomagic to believe that it works, sometimes understanding the how is the key to being able to trust it.

These two keys (or numbers) are related mathematically on the secp256k1 elliptic curve. The private key is a randomly generated number plotted on the curve, and the corresponding public key is a related point on that curve.

The real point of this magical curve is that it creates trap door functionality, meaning that once we generate the first point on the curve (the private key) the corresponding second point (public key) is easily found but impossible to find in the opposite direction. If the user has the private key then the user always has the public key, but if other users have the public key it’s mathematically impossible for them to do the reverse to find the private key.

Is the Bitcoin address the same as the public key? 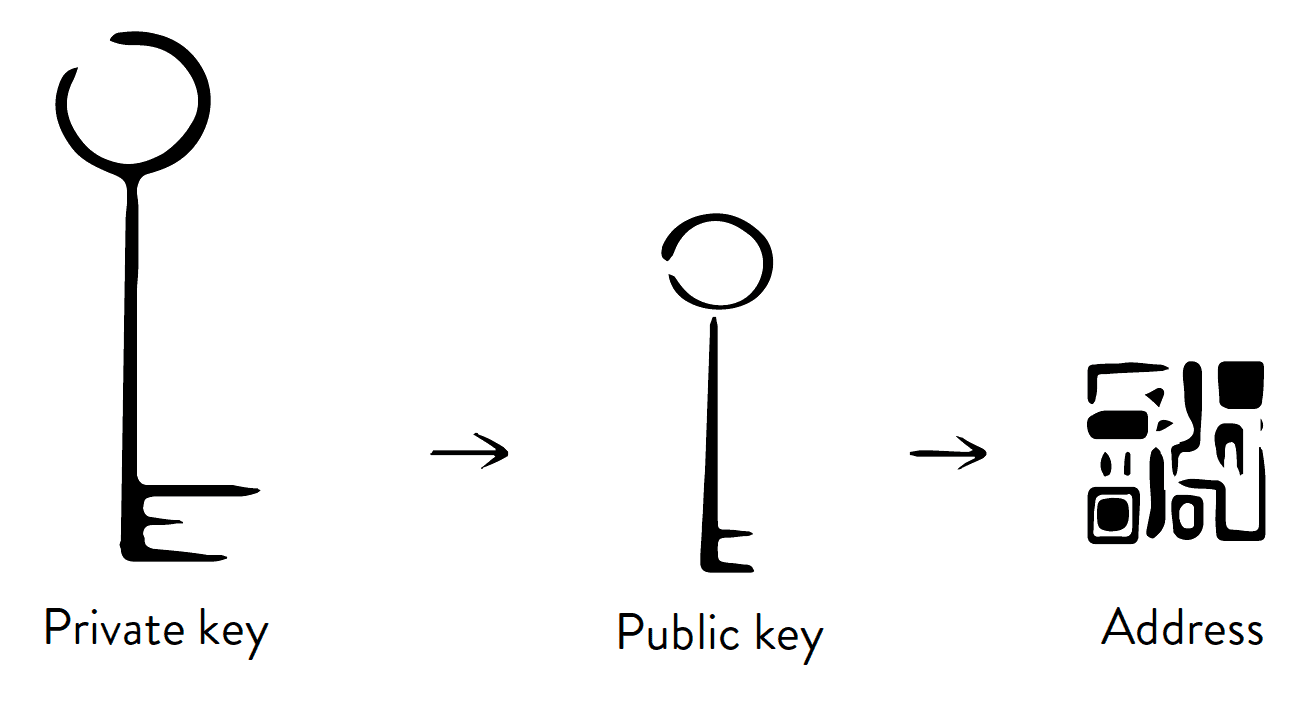 Because public kets come in different formats they can start with a 1 , 3 or bc1. There are uncompressed public keys, compressed public keys, and wif format. But what’s important to understand is that when you’re providing someone with a public address (or QR code) you’re giving them the ability to lock bitcoin on your behalf.

How are bitcoin keys and addresses generated?

The bitcoin wallet software generates the users’ wallet file, addresses, and keys. The private is generated from a part of the software that is specially designed to be able to handle big numbers and generate them at random.

How many private keys are there?

What is a seed phrase or mnemonic recovery?

A mnemonic phrase is a private key in a different form:

In the same way numbers can be expressed as words (zero) and numerical digits (0), keys are just a really long string of numbers that have the same properties. Instead of using the word expression of the random number, the seed phrase uses a list of 12 or 24 random words to represent the random number.

The purpose of the mnemonic is to convert currency, money, and funds into human-readable words. So that the transfer of value can be written on to paper, or spoken over a cell phone and easily shared.

TIP: To add some security a password can also be added to the phrase.

What is the best way to store Bitcoin private keys privately?

The most secure way to store private keys safely is offline in cold storage, on a dedicated hardware device with your recovery mnemonic stored separately.