Why I Wrote Bitcoin Clarity: The Bitcoin Book 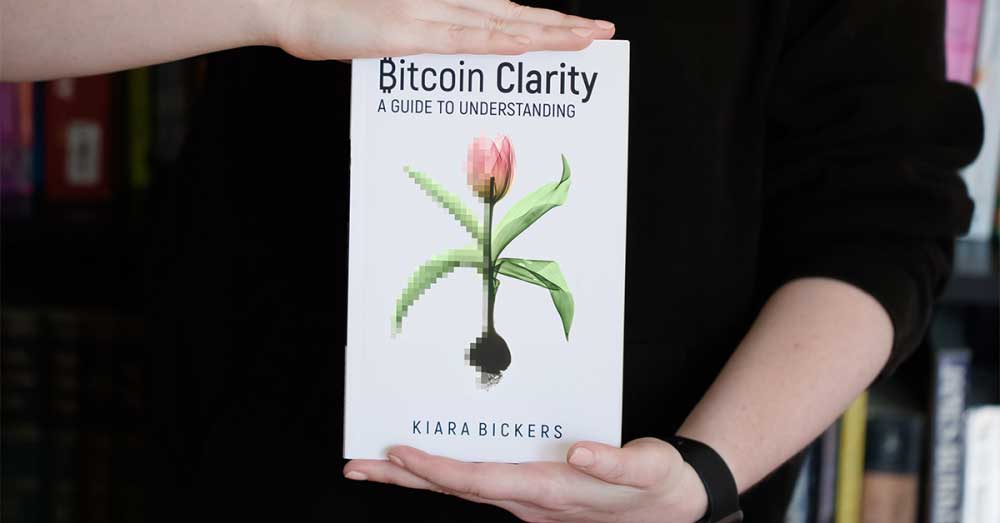 In 2017, this was the most Googled question. Years later, there are still only a few people who actually understand what it is. Why? Bitcoin has existed for over a decade, why is it so difficult to understand or explain? Users hear about the Bitcoin network, Bitcoin the peer-to-peer payment system, bitcoin the coin on the blockchain, all alongside dramatized stories of Satoshi Nakamoto and the volatile price of bitcoins they have no idea what to make of any of it.

Bitcoin is a complex system but it doesn’t need to be complicated.

There are a few hefty challenges when trying to learn about Bitcoin.

How do you understand how Bitcoin is different from other altcoins, digital currencies, or blockchains. Users hear things like, “X is the real Bitcoin,” “X cryptocurrency is faster, cheaper, and better than Bitcoin,” “Bitcoin is slow and dead, Y is the next Bitcoin.” What new users have to realize is that creators and promoters of competing cryptocurrencies and blockchains have a direct incentive to create misleading information and promote their cryptocurrency. People have biases.

Where is an authoritative place to learn about Bitcoin?

To put it bluntly, there isn’t one.

Unless you’re a cryptographer or developer, users really have no way of understanding Bitcoin straight from the source. There are millions of people that want to learn about Bitcoin, but they don’t know where to start or who to trust. Think about how to you might choose a new doctor or lawyer if you’re doubting whether you can trust the opinion of one expert the best option you have is to get the opinion of another. But what if they all disagree?

Once you hear every perspective you have to take a leap of faith and decide whose opinion you’re going to choose to trust . . .

Your economics professor, a crypto Twitter guru, or your financial advisor, who they determine which version of pro or con Bitcoin propaganda they sell you.

Even great books like Mastering Bitcoin by Antonopoulos and Programming Bitcoin by Jimmy Song are not intended for the average user, they were written for potential industry developers. Advanced users who want to run their own full node, people who want to become a Bitcoin wallet developer or contribute to Bitcoin Core. Technical books like these explain how it works, but not in the most accessible way that makes it easy for new users to truly understand it.

Cryptoassets by Chris Burniske or An Altcoin Trader’s Handbook by Nik Patel gives readers the perspective of Bitcoin from markets, trading, and finance. The Bitcoin Standard is a fantastic book by Saifedean will give you the pro bitcoin narrative from the perspective of Austrian economics. While a book like Attack of the 50 Foot Blockchain by David Gerard will present the con narrative by building up different strawman arguments against bitcoin then tearing them down.

My goal is not to tell people what I think Bitcoin is, but to give people a new way of seeing it for themselves.

What is Bitcoin Clarity?

Clarity is a way of being coherent and transparent about your thoughts, to communicate what’s important.

We live a financial system based on credit. But owning Bitcoin is not like having a bank account or credit card. Bitcoin is a complex system of transactions occurring over a public ledger, with pubic and private keys. Before learning how to use bitcoin, how to buy bitcoin, how to create bitcoin addresses, how to send bitcoin, users should have some basic understanding of what bitcoin is.

Instead of giving people a technical view of the markets or protocol, I want to give people the tools to understand bitcoin with visuals, mental models, and systems thinking.

I worked with Bitcoin developers to create the mental models that accurately map to the technical details. 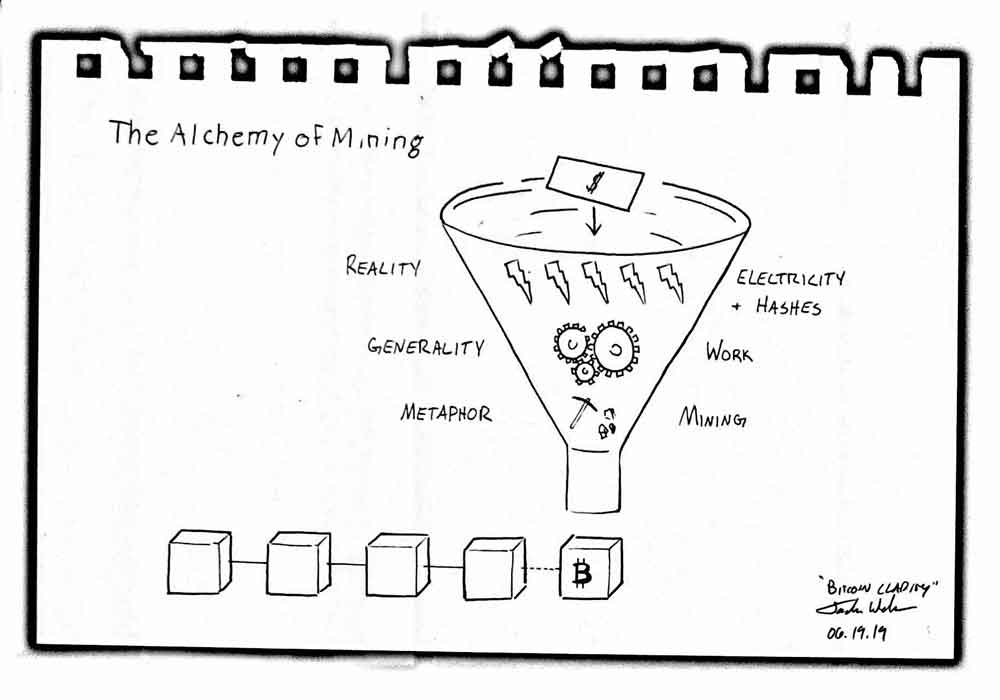 In writing the book I sketched out hundreds of images to visually explain everything about how it works. Then I got an artist from my local coffee shop to redraw it.

I worked with traders to cover the section on markets and mindset. 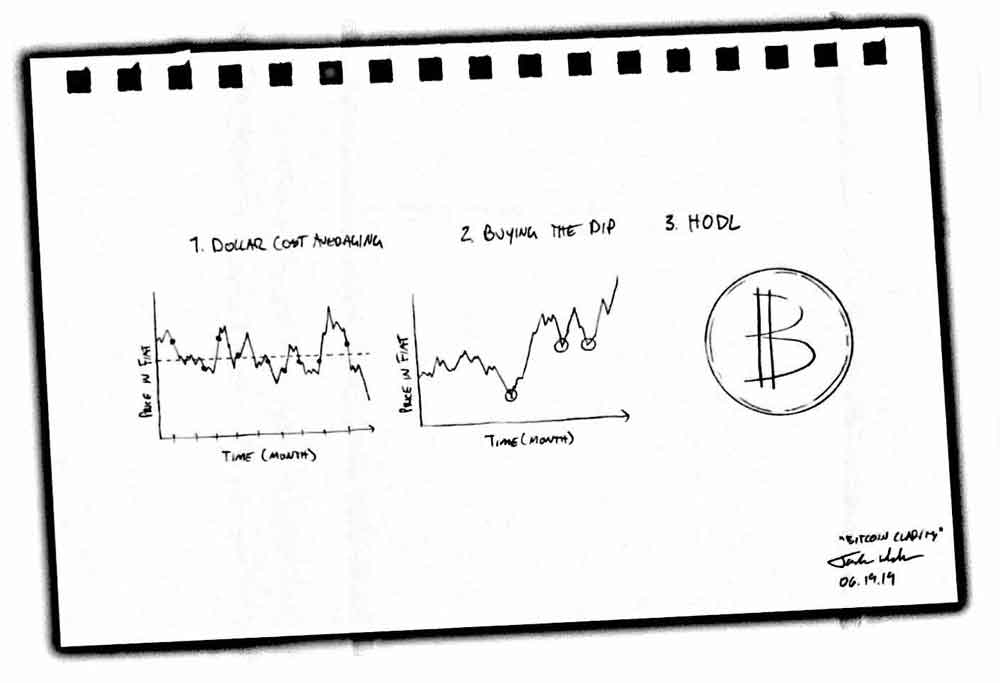 I used systems thinking to structure the book, without the added complicity of code, economics, or cryptography. Because it’s my belief that people shouldn’t want an expert to tell them what Bitcoin is, they should want to be showed what it is, by giving them new ways to see it for themselves. I’ve made Bitcoin as easy as possible for people coming from any other background or industry to understand.

Get the Bitcoin Clarity now on Amazon. .

Plan Your Master Strategy
& Get Started In Bitcoin Today 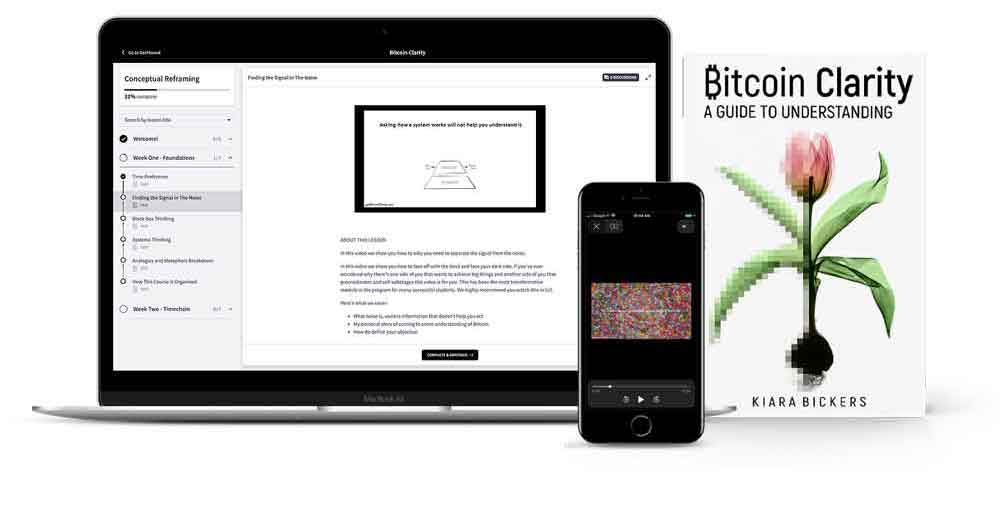